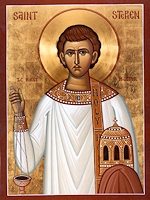 Saint Stephen (sometimes spelled "Stephan"), the protomartyr of Christianity, is venerated as a saint in the Anglican, Roman Catholic, Lutheran, Oriental Orthodox and Eastern Orthodox Churches.

Stephen's name is derived from the Greek language Stephanos, meaning "crown". Traditionally, Stephen is invested with a crown of martyrdom; he is often depicted in art with three stones and the martyrs' palm. In Eastern Christian iconography, he is shown as a young, beardless man with a tonsure, wearing a deacon's vestments, and often holding a miniature church building or a censer.

History approximates Stephen's story around A.D. 34-35, shortly after Jesus' crucifixion. According to Chapter 6 of The Acts of the Apostles, Stephen was among seven men of the early church at Jerusalem appointed to serve as deacon. However, he is depicted as also successfully preaching to his fellow Jews and bringing many to accept Jesus as the Messiah. After a dispute with the members of a synagogue of "Roman Freedmen," he is denounced for blasphemy against God and Moses (Acts 6:11) and speaking against the Temple and the Law. Stephen is tried before the Sanhedrin. His defense is presented as accusing the Jews of persecuting the prophets who had spoken out against the sins of the nation:

"Which one of the Prophets did your fathers not persecute, and they killed the ones who prophesied the coming of the Just One, of whom now, too, you have become betrayers and murderers." (7:52)

While on trial, he experienced a theophany in which he saw both God the Father and God the Son:

He is condemned and stoned to death by an infuriated mob, which is encouraged by Saul of Tarsus, later to be known as Saint Paul the Apostle. After his own conversion to Christianity, Paul makes reference to witnessing Stephen's martyrdom in his writings.

St. Stephen is the patron saint of casket makers, deacons and altar servers.

Gates are open from